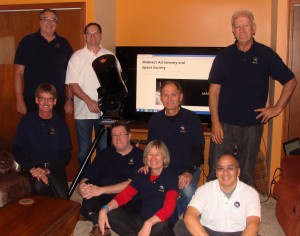 Started Meeting with music video “Over the Horizon” produced by Planetary society with Bill Nye, Neil DeGrasse Tyson, Emila Lackdawalla, short historical clip with Carl Sagan on Johnny Carson show with lightsail project which should fly on the inaugural Falcon Heavy in 2016; Planetary Society just celebrated 35 year anniversary
Only Phil (Jun 2016) & Judy (Aug 2016) remain as possible winners in our MASS Prize contest of guessing when the US will launch astronauts to the ISS from US soil. We made the guesses in July 2011. Looks like our last two pessimists will not be winners because the estimated launch dates from SpaceX and Boeing are in 2017.
I asked Kevin and Dean if we should start planning a total solar eclipse trip to southern Illinois in 2017? Consensus was that everyone will be just doing a day trip, so more elaborate plans probably are not needed.
Everyone except Phil and Keith has seen the movie “The Martian” and everyone has liked it; article about making bricks to protect from radiation, 96% CO2 atmosphere, we can survive at 5# pressure so Mars suits are less bulky, average temperature -70 F, NASA’s 2020 rover to take CO2 and make oxygen, Elon Musk wants to put people there by 2027, enough water for 1000 ft deep ocean everywhere if the polar caps and subsurface ice was melted. Musk is in favor of terraforming the planet by nuking the poles with atomic bombs.

It was kind of a Neil DeGrasse Tyson night with appearances on the Steven Colbert Show, Bill Maher Show and his own program “Startalk”. I was impressed with Steven Colbert’s knowledge of astronomy. He has had Elon Musk as a guest and his interview with Tyson shows he has a knowledgeable background; Colbert did a comedy skit paredy of the new Cosmos show. It makes me happy when I see astronomical content on main stream TV. It harkens back to when Johnny Carson would have Carl Sagan on. Colbert brought up the KIC star as an alien “ring world”. The star is 1500 lightyear away, SETI has monitored it for a week with no signal yet. Colbert almost got NASA to name one of the ISS modules after him but NASA changed the rules and named it Tranquility. As a concession to stacking the deck against him, NASA named their treadmill after him. The TVIS (Treadmill with Vibration Isolation Stabilization System) treadmill is also called the COLBERT(Combined Operational Load Bearing External Resistance Treadmill).
The “Startalk” episode with President Clinton was the next clip we watched. Clinton impressed me with his knowledge on particle physics and science in general. He talked about how he placed a 3.8 billion year moon rock in his office so he could try to get politicians on opposite sides of an issue to compromise. Author Richard Muller who wrote “Physics for future presidents” also made an appearance. I’m reading his book now. An interesting factoid from the book is that chocolate chip cookies have 5x the energy of TNT. The cookies just release their energy slower. Another topic for Clinton was the creation of an Office of Science. He also introduced the “grandparents test” for deciding difficult science decisions. As a grandparent, would you side with the 2% portion of experts who feel car safety seats are dangerous or the 98% of experts that think the seats save lives. Clinton felt people would side with the 98%. Many of our congressmen seem to be failing the “grandparents test” on global warming.
Topics:
Recent developments,

1. Trump on “man on Mars” – he was kind of condescending to a young boy who asked his position on space. Trump said build infrastructure first (space or roads?). Cruz is all for getting Russia out of being our only way of getting people in space. He’s open to moon or mars as a destination. He doesn’t like study of climate change; lot of candidate stances; Face the Nation with Buzz Aldrin and Newt talking about his 2012 proposal, Constellation, pork barrel issues; Ted Cruz (R-Tx) the most eloquent championing spending more money on exploration but no Earth science, Jeb Bush, Ben Carson, Hillary Clinton had nice things to say about space recently, Bernie Sanders & Donald Trump have not been enthusiastic. In July 1989, original Bush with Apollo 11 astronauts at his side created SEI (Space Exploration Initiative) that would return astronauts to the moon and send them to Mars but he didn’t consult with Congress, Clinton quietly terminated when he took office in 1993 to concentrate on ISS; In Feb 2004, later Bush announced VSE (Vision for Space Exploration) again return to moon by 2020 and then off to Mars. He consulted with Congress but never mentioned it again and it went underfunded and Obama canceled in Feb 2010. Program needs to be supported for the long term. Although Constellation cancelled, a lot of what was done was recycled into SLS & Orion. Whatever the plan it needs support of aerospace stakeholders, NASA, Congress and much of the public. President needs to pay attention to process. He can’t announce it and then ignore it. Right now they are robbing Commercial Crew to fund SLS/Orion; Jeb Bush says Newt’s idea was pretty cool.

2. SpaceX planning return to flight in November(now December) – the next Falcon 9 rocket will have Merlin 1-D engines upgraded with 15% performance (will allow delivery of geosynchronous satellite and a landing attempt). It’s called the Falcon 9 1.2, first payload is a SES-9 satellite for Luxembourg (will take 4-6 mo to reach orbit because electric thrusters) and SpaceX will try to land 1st stage on drone ship called “Of Course I Still Love You”. The next launch will be the NASA Jason mission in Dec. with an older Falcon 9; Orbital plans to return to resupply of ISS on Dec 3 with stretched Cygnus (named Deke Slayton) that has volume increased from 18 cu meter to 27 and weight increase to 7700# on Atlas V rocket(price cut from $150M to $100M). When Orbital goes back to their new Antares the weight will be reduced to 7100#. On Colbert show Musk said nuke Mars poles to rapidly terraform it, Colbert labeled him as either a super-hero or super-villain; Las Vegas puts odds of SpaceX putting a man on Mars as 5-1, NASA 80-1, closest other entity is the Mars Society at 9:1. SpaceX has shifted to launching 11 Orbcomm satellites before SES-9 because only 1 burn of 2nd stage needed. Geosync satellites like SES-9 need a second relight. The Orbcomm launch is in 6-8 weeks with SES-9 one planned for late Dec. NASA set to award new cargo contracts for $14 billion for 2018-2024 Dream Chaser and Boeing in the running. Award now delayed to no later than Jan 30, 2016 but Boeing apparently has been cut out with its cargo CST-100. NASA’s 1st cargo contract was awarded in 2008. So far Orbital ATK has had 3 successful flights to ISS(of 10 total in the contract, resume Dec 3) with one failure (Oct 2014 mishap) and SpaceX has had 7 successes(of 15 total in contract, resume Jan 3) with 1 failure (Jun 28 mishap).
3. NASA announces moving streaks are salty water – RSLs (recurring slope lineae) appear in summer on North facing walls of craters; MRO analyzed from orbit with spectroscopy and identified as hydrated salts of perchlorate; Mike Meyer chief scientists, Alfred McEwen Univ of Arizona HIRISE in France, 2nd guy by phone and girl from Ames; Grunsfeld goes thru future probes 2016 Insight & ESA ExoMars with Russia, 2018 ESA lander with drill and organic analyzer, 2020 NASA next rover with sample collection and device to derive oxygen from CO2; Mt Sharp might have RSLs; Dean says we sort of knew that for quite a while but this is definite spectroscopic proof.  nice picture of RSL Dean good comment that they are in rugged terrain that a rover probably could not reach.
4. Scott Kelly reaches most US cumulative time in space record on Oct 15 (when his current mission is at 202 days) – he also went on to surpass the Lopez-Alegria single mission record of 215 days set in 2006-2007. The ISS achieved 15 years of continuous occupation on 11/2/15.
5. Casini takes picture of Enceledus (320mi diameter) – Oct 14 1124 mi away pictures of north polar region, scheduled to pass just 30 mi over southern area with tiger stripes sampling icy vapor, craft has been there since 2004 and scheduled to end in 2017 when it runs out of fuel, Dec 19 will be last pass at 3106 miles above moon; Cassini to dive in Enceladus plumes – Oct 28, around Saturn since 2004, south pole plumes known to contain ice, water vapor and organics, trying to confirm hydrogen molecules that would indicate hydrothermal vents at bottom of ocean, sorry to see Cassini ending Dec 19 last probe of Enceladus.
6. Possible deal on NASA budget –The proposed conference compromise would give $19.3 billion to NASA a $1 billion increase and includes full funding for com crew and each program. It is a 2 year deal but needs Senate approval; Northrop Grumman just got contract for $80 billion for new bomber , stated upgrade of weapons systems will cost $348 billion over 10 yrs. It looks like the discretionary spending for NASA came with the concession to fund a lot of Defense Department weapon systems.
7. Spookey the Halloween asteroid 2015 TB145 – In NASA’s coverage of closest approach by the Slooh group the rotating radar picture of Spookey looks like a skull. Comes almost within moon’s orbit at 300,000 mi, 400m object, expert said damage would be a 6 mi crater and houses blown down in a 100 mi radius, NASA funding has gone up to $40M/yr vs only $4M in 2009 for asteroid searches. Because Spookey has a highly eccentric orbit not within the ecliptic, many feel it more a burned out comet than an asteroid. It was discovered on Oct 10th only 21 days before closest approach. (The designation 2015 TB145 means 2015 year discovered, T means during 1st half of Oct, B means 2nd object in 145th grouping of 25 objects, so it is the 3627th discovered object in the 1st half of Oct). At closest approach, it will be traveling at 78,000 mph. The moon’s orbital speed is only 2288 mph (moon moves ~ half degree/hr east or its own diameter), but earth’s rotation moves it 15 degrees/hr west. The NEOWise mission revision of 1000m to 100m was revised downward by 44% (19,500 objects thought to exist now vs 35,000) objects down to 40m can blast thru atmosphere, study didn’t apply to objects 1000km estimate revised down from 1000 to 981 and with 911 (93%) discovered NASA has satisfied Congress’s 1998 mandate of finding 90% of objects, for 100-300m only 200 discovered from estimated population of 1370 only 15%; talk about Slooh too; NASA’s proposed NeoCam mission is usurping B612’s Sentinel probe. Chelyabinsk was a 20 meter object, Barringer crater AZ was 40 meter. Spookey is the largest object until Aug 2027 when 1999 AN10 passes at about the same distance Spookey’s closest approach is 12:05PM Saturday afternoon 12/31.

Main Topic:
“Hunting Planets: Celebrating 20 yrs of Exoplanets” – Carnegie Institute, just a few days old talk– 3 scientists 20 minutes each: 1) Historical perspective from the first exoplanet to Kepler; 2) “Planet for Goldilocks” which talked about the Kepler discoveries; and 3) a summary of future probes and ground based telescopes for exoplanets. Time permitted only listening to the middle talk.