This was our 49th meeting. Dean, Harry, Dave and his friend Liz, Keith and I were in attendance.
As the first order of business, we all suggested that Keith credit himself on the website. It would not exist without his support and technical expertise.
There are quite a few interesting programs coming on this November. Foremost is the 6 part series “Mars” on the National Geographic Channel starting this Monday, Nov 14. Ron Howard is Executive Producer and the trailer includes clips from Elon Musk and Neil DeGrasse Tyson. It looks like a quality production. Another series that I have been enjoying is the quirky humorous “People of Earth” on TBS. It concerns itself with a support group of people who feel they have been abducted by aliens. The last series I would like to mention is “How the Universe Works” on the Science Channel. I’ve seen the older episodes numerous times and look forward to the new season starting Nov 29.
The next item was announcing the Super-Moon coming this Monday, Nov 14. A super moon is loosely defined as a full moon occurring when the moon is within 90% of its closest approach to the Earth (perigee). Since the moon has the optical illusion of appearing bigger when it is near the horizon, I suggested that you look for it at 4:25 PM on Sunday, Nov 13. The moons diameter varies by 14% between perigee and apogee (farthest point in its orbit from Earth) and the area/brightness varies by 30%. This will be the largest full moon since Jan 26, 1948 (68 years). The largest in my lifetime. See the Sky & Telescope site for more details. 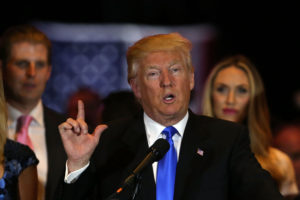 Our first topic was how we thought the election of Donald Trump would affect NASA. Most people thought changes were definitely ahead but all of them might not be bad. Even though he might remove Earth observation from NASA oversight, hopefully it would be transfer to an equally capable division of the government. We also felt that adding a return to the Moon effort before we head of to Mars, makes a lot of sense. Europe, Russia and China all have interest in a Moon program and it would make sense for the US to lead the efforts. Testing our space equipment in a place closer to Earth seems logical. The US being involved in the lunar environment would help enable the private sector who wants to do lunar/asteroid mining to step beyond low earth orbit (LEO).

We were a little more concerned about NASA’s large rocket (SLS) and its new space capsule (Orion). Both projects seem to be more a jobs program for powerful Republican politicians than scientifically required infrastructure. Dean and my concern is that they will be so politically bloated and expensive that they will have a hard time competing with the powerful rockets and new space vehicles coming from private industry. The New Glenn rocket possibly coming from Jeff Bezos in 2019 could lift 35-70 metric tons (mt) for $200 million per launch. The Falcon Heavy scheduled for its first launch in 2017 also is in that category has a lift of 55 mt into LEO and is priced between $90-$130 million based on the weight of the satellite. The SLS will have cost $13 billion to design and develop through its first launch in late 2018. It is estimated that it will cost $60 billion for 20 launches through the 2030’s ($3 billion a pop).The first stage of the New Glenn will be reusable and have 7 BE-4 engines. The BE-4 is the engine planned to be used when the Atlas 5 is re-designed to not use Russian engines and christened the Vulcan rocket. Vulcan’s first launch is scheduled for the end of the decade in 2019.

Commercial Crew has been having a rocky road recently. On September 1, five days after our last meeting the Falcon 9 rocket being fueled for a test launch of an Israeli satellite ($200 million value) exploded on the Florida launch pad. SpaceX feels that their super-cooled propellants caused solid oxygen to form on a carbon fiber helium pressurization tank within the oxygen tank. The oxygen reacted with the carbon to cause an explosion in the second stage 8 minutes before the test fire of the rocket. Falcon 9 will be the rocket that launches the manned Dragon capsule to the ISS. NASA has expressed concerns before that Falcon 9 should not be fueled while people are in the Dragon. SpaceX because of their super-cooled propellants must launch within 30 minutes of fueling the rocket. I’m not sure how that will be resolved. SpaceX still has their first manned flight to the ISS scheduled for August 2017. Falcon 9 launches are anticipated to resume from another launch pad at Cape Canaveral in December this year.

The other Commercial Crew company, Boeing has recently delayed their Starliner capsule schedule dates by 6 months. They now are planning for the first launch of a manned Starliner to the ISS in August 2018. The delay was due to necessary modification of addition a skirt to the Atlas 5 rocket to minimize aerodynamic forces during supersonic flight. NASA’s goal is to have both companies certified for missions to the ISS by the end of 2018. It has not purchased any seats on Russia’s Soyuz capsule for it’s astronauts in 2019 and because of the required lead time, it may be too late to do so now.

Because all of our guesses from July 2011 as to when US astronauts launched from US soil would enter the ISS have now passed, I have the people in attandence guess a new date for when US astronauts in a US capsule would dock and enter the ISS. I hope to solicit guesses from those not in attendance over the next couple of week. Then I’ll publish our new MASS Prize 2 spreadsheet. The closest guess to the actual date will get a $20 Dairy Queen gift certificate.

Commercial Cargo is recovering from their 2 accidents. Orbital/ATK successfully launched its redesigned Antares rocket with its Cygnus module loaded with 5100 lbs of supplies on October 17 from Wallops Island in Virginia. The date was 2 years after their rocket using older spare engines from Russia’s N1 rocket explosed a few seconds into the launch. Orbital used an Atlas 5 rocket to launch 2 supply missions in the interim. On Nov 4 NASA announced that they want Orbital to use another Atlas 5 on their next supply mission. The reasons are not clear why. SpaceX also has had a supply mission explode in June 2015 but has had two successful supply missions since that accident. Their latest rocket explosion although not a supply mission has grounded their Falcon 9 rocket for a least 3 months. NASA in their latest awards for ISS supply has added a third company Sierra Nevada with its cargo version of the Dreamchaser to the mix. Dreamchaser is an amazing lifting body type craft and will boast the shortest orbit to equipment offload time delay(4 hours) of any of the supply vehicles. Cygnus from Orbital/ATK burns up in the atmosphere and returns no cargo. SpaceX’s Dragon lands at sea and takes 12 or more hours for equipment return to land.

We then watched the Nov 9 Steven Colbert show with the lead-in with he and Neil DeGrasse Tyson on the roof stargazing and then pitching the telescope off the roof to smash into the pavement below. Neil was also an entertaining guest with quoting Apollo astronaut Edwin Mitchell speech about how politicians might change their petty ways if they could only see the Earth from the perspective of the moon. Neil also had the goal of using the saying “Make America Smart Again”.

Some of the following topics we covered, some not.

We finished up by watching Brian Greene as the guest on Neil DeGrasse Tyson’s StarTalk. There were some very heavy topics like the multi-verse and do we live in a computer simulation. Because it is easier to create a simulation than a real universe, statistically there should be a lot more simulations than real universes by now. On the other hand, a simulation is a more complicated situation that just a real universe. So by Occam’s Razor the simpler explantion that we are in a real universe is probably true. We also tried to fathom the duality of quantum physics where objects can be particles or waves and exist in multiple locations. We dwelt briefly on the 1935 proposition of Edwin Schrödinger about the cat in the box being both “alive” and “dead”. We wrapped up at 10:15 PM with an explanation of the 11 spatial dimensions in string theory and how some are not percieved by us because the minutely curled up on themselves. The analogy is our perception of a garden hose from a distance being considered having only one dimension of length. But to a tiny ant crawling on the hose it would have an extra circumferencial dimension. I think we all slept well after this deep thinking.