Dave, Jim A., Phil, Silvio and I were in attendance for the 45th meeting. Both Dean and Keith were not able to come due to work commitments. We went with Plan B and hopefully Keith can present his space colonization paper at a future meeting. I did show everyone his article “Space Colonization, What Are We Waiting For?” on page 47 of the Spring 2016 AdAstra magazine of the National Space Society. How cool it is to have such renown published person in our group.

Out first topic of discussion was status of the SkyWatch program at Triton College. Keith, Silvio and I were able to sit down with the new director of the Cernan Space Center after the last SkyWatch on March 19. I think we made a good case for the importance of SkyWatch and what a treasure it is with the 5 astronomers all speaking to recent events from each of their unique viewpoints. The director accepted that but made some points about the resources it takes to produce SkyWatch and the fact that it is presented only once. Time will tell on what the final resolution will be but I hope it remains close to its current format. In regards to member benefits, I was happy to hear that the “Big Event” was still being planned and that the director was investigating how to get a viewing for the members of the new documentary about Gene Cernan and his 1972 moon landing titled “The Last Man on the Moon”.

Another topic was the March 17 article about the Illinois state fossil, the Tully Monster. The Tully Monster has an interesting history and its fossils have only been found locally in Will and Grundy counties. There has been some recent investigation of the fossils and it has now been re-classified as a vertebrate and a predecessor of the lamprey. Formerly is was considered more of a worm-like creature. The fossils date from about 300 million years ago and vary in size from 3-15 inches long. The “monster” in the name comes from its unusual shape. It had a stubby body with eyes that stick out each side on the end of a stalks. It had a proboscis or nose as long as its body. At the end of the nose were teeth and a mouth. Weird animal! 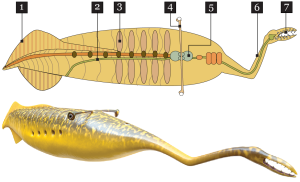 The amazing connection is that Dan Troiani, one of the presenters at SkyWatch, used to make models of the Tully Monster and sell them at geology/fossil conventions. He recently was taking a “members-only” behind the scenes tour at the Field Museum of Natural History and saw one of his models on the desk of the head curator. The curator had purchased the model second hand and always wondered who was its creator. Dan told him he made it and the two have been goods friends ever since. Sometimes its an amazing small world.

For the last general topic I told the group that I had now completed 22 online classes in the last year and a half. The classes were mostly astronomy but there was a little biology and math also included. One of the best was an astronomy class by Chris Impey from the University of Arizona. Dr. Impey has some great astronomy teaching material on the Internet and I hope our group gives them a look to see if they would be useful for of our education efforts. Your can see his short articles and videos at his website Teach Astronomy. 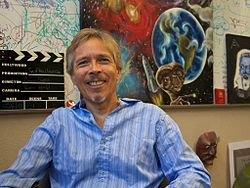 I recently participated in a 1 hour live Q & A by Dr. Impey where I learned that globular clusters formed from the spherical gas cloud that eventually formed the Milky Way galaxy.  This makes the proto-Milky Way gas cloud more than 12 billion years old. The 150 globulars formed in this spherical distribution and the gas went on to condense into the disk that shapes the galaxy today. The globulars were robbed of any further star formation because of the absence of any new gas in there environment. There are about 500 globulars around the Andromeda galaxy and large elliptical galaxies like M87 have up to 13,000 of them. The globulars are 10-300 light years in diameter and can have up to a million stars. The central star density is a high as 100 stars in a cubic light year. People conjecture that if intelligent life existed in the center of globular clusters, interstellar travel could be accomplished because the distances would be much smaller than what we have around the Sun.

Other recent knowledge that I acquired from my classes concerns the expansion of the universe. The measure of this expansion is the Hubble Constant which changes through time but is currently about 65 km/second/megaparsec. That means that 2 objects separated by a megaparsec or 3.26 million light years would see each other traveling 65 km/sec apart due to the expansion of space between them. This expansion only occurs in non-gravitationally bound systems. Things like the Local Group of galaxies and the Solar System or atoms(electromagnetic and strong force bound) do not expand this way. Gravity somehow neutralizes this expansion. If the expansion did occur in the Milky Way, an observer at the center would see the outer fringe 50,000 light years away expanding at about 1 km/sec. That distance increase would be only 2 x 10^-18 of the total distance. A pretty small effect. That is why it takes enormous distances to see the universe expansion.

The other interesting information was concerning neutron stars. A neutron star has a density equivalent to compressing the Empire State Building down to the size of a single grain of sand. When a white dwarf star implodes and collapses into a neutron star producing a supernova, all the elements in the core of the white dwarf, things like oxygen, carbon, etc., dissolve into a sea of neutrons. Every proton combines with a electron producing a neutron and a neutrino. There are about 10^58 neutrinos produced in a short time making the supernova shine with the equivalent energy of the entire universe. The outer layers of the star absorb about 1% of these neutrinos which is the force that expels those layers out in a supernova explosion. The universe is amazing.

We finished the night by listening to Alan Stern’s talk to the National Academy of Sciences in Washington DC on Wednesday on the New Horizons mission to Pluto. Dr. Stern made the comment that 40% of Americans were not born when the last US flyby of a planet occurred in August of 1989 (Voyager past Neptune). He also added that the US has been the first nation to visit every planet in the solar system. He commented on how lean the New Horizon mission was. It was done for $700 million which is only 1/5 of the cost of one of the Voyager missions. It has been a slow and steady process but one half of the data has now been sent down to the Earth from the spacecraft. And New Horizons is poised to have a close encounter with the Kuiper Belt Object, 2014 MU69, in January 2019. The KBO is another billion miles from Pluto and is small at only 30-45 km in diameter but New Horizons should get some amazing detailed pictures because it will come 3 times closer than it did to Pluto. With it plutonium electric generators New Horizon should be able to transmit until the end of the 2030s. Hopefully the Earth will still be listening to it. Some new maps with feature names also have been produced. A neat picture of ice mountains on the edge of nitrogen bubbles was published, “x marks the spot”. 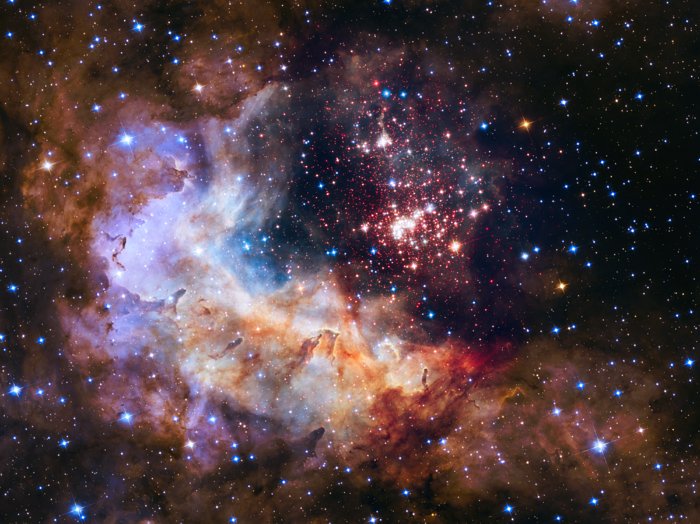 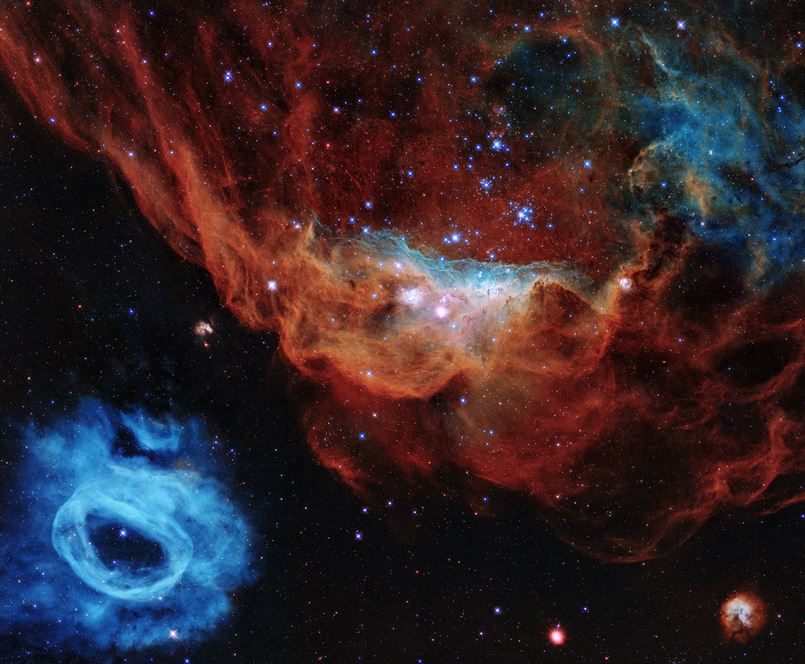 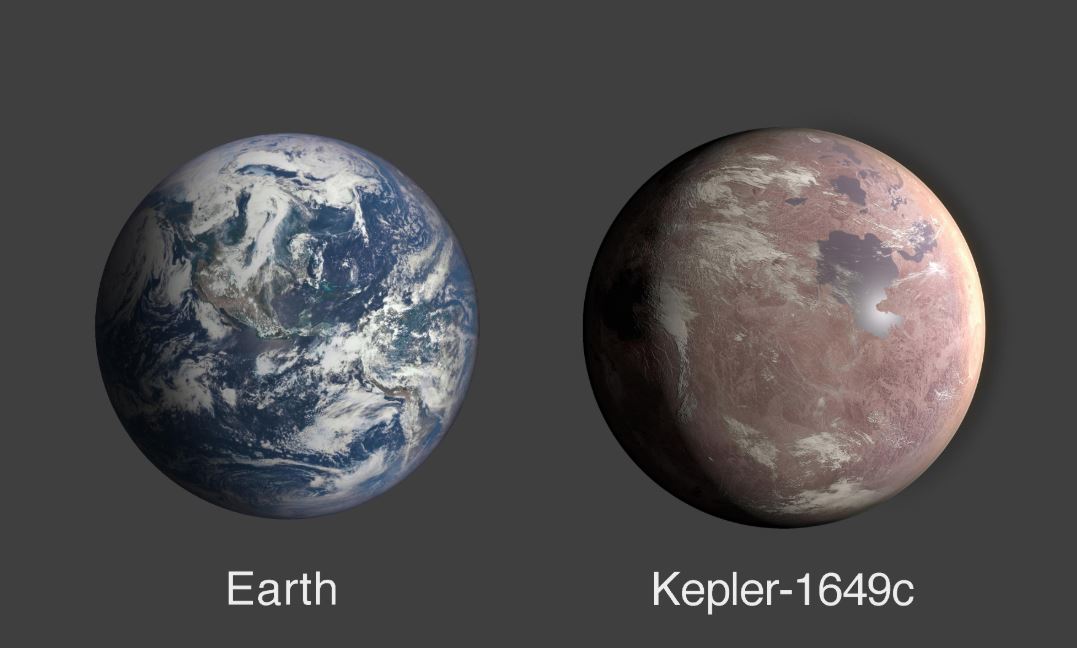 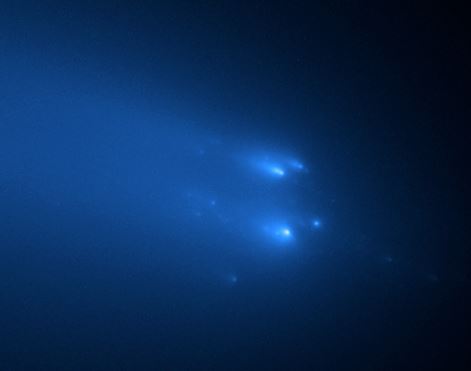