Keith, Phil, Dave, Dean and I were in attendance for our 46th meeting.

We started the meeting with a quick review of a couple of Internet astronomy resources. One resource is from an astronomer, Chris Impey, of the University of Arizona. His site TeachAstronomy has a good mix of short text and video clips. Chris also teaches an 11 week MOOC on the Coursera platform titled “Astronomy: Exploring Space & Time” which I took in the Fall of 2015 and thoroughly enjoyed. The class was self paced and dealt with both technical and philosophical aspects of astronomy.

The other resource is the four classes on the EDX platform from two astronomers from the Australian National University, Paul Francis and Nobel laureate Brian Schmidt. The classes slightly build on each other and are titled: 1) Greatest Unsolved Mysteries of the Universe; 2) Exploring Exoplanets; 3) Violent Universe and 4) Cosmology. I’ve also taken these classes and found them very entertaining but they get much more into that mathematical calculation of various astronomical situations. If can be quite empowering to calculate the balance of centripetal force and gravity to calculate how fast a white dwarf star can spin before it begins to tear itself apart.

I also gave everyone a “heads up” that the first two installments of the new Science Channel series “Space’s Deepest Secrets” have been very good. The first episode on April 26 was a 2 hour collage of 6 very recent topics and the second episode on May 3 dealt with dark energy and matter.

We lead off the meeting with the recent accomplishments of SpaceX. As recently as the morning of the meeting, the company successfully landed its Falcon 9 first stage on a barge in the Atlantic for the second time. They also successfully resumed sending supplies to the ISS with their Dragon capsule on April 8. This was their 7th paying mission and its 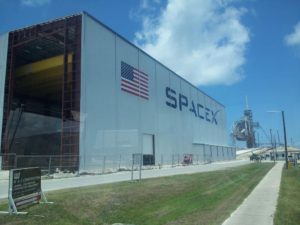 brought up the BEAM (Bigelow Expandable Activity Module) as well as 20 mice to study muscle atrophy and cabbage to grow and eat in space. SpaceX has an agressive schedule of 18 launches planned for 2016. The launch the morning of the meeting was already their 4th one for the year.

Bringing the first stage of the Falcon 9 back is an amazing accomplishment when you look at the size of it. SpaceX estimates that they will shave 30% off the $60 million dollar cost of the rocket by reusing the first stage. Elon Musk said the rocket would be reusable for 10-20 missions and with some minor refurbishments maybe 100 missions.

Its quite an emotional moment for me to listen to the cheers of the SpaceX employees as the rocket lands on the barge called “Of Course I Still Love You”. This occurs at about 26:00 (min:sec) in the video and they begin to chant, “USA, USA, USA, … at 28:30. There also is a phenomenal 4K quality video of the landing that shows how rough the seas were. I’ve heard there were 50 mph winds at the time which makes the landing all the more amazing. The first stage uses 3 of its 9 engines to counteract its easterly launch motion and then begins the return to Earth. The actual landing on the barge occurs with only 1 engine firing. It is also interesting how the stage uses paddles (2nd video on page) to keep itself properly orientated for landing. It looks like this rocket landed a little at an angle and might have damaged one of its landing legs. Here is a video shot from the barge.

The plan with the the first sea recovered stage is to test fire it 10 times and if successful use it for a new satellite launch sometime in the Fall. When the stage was being returned to its storage hanger at the Kennedy Space Center there were a couple of humorous videos (the first & third videos) showing the amazment of people as to its size of the stage.

The BEAM that was tranported to the ISS had been attached to one of the ports of the station. It will be expanded to its full volume 4 times its transport size sometime latter in May. It will stay on the ISS for 2 years of testing. Its Kevlar exterior is anticipated to be better protection to micrometeoroids than the metallic walls of the typical ISS modules. BEAM is 565 cubic feet and 3100 lbs, but Bigelow has plans for a much bigger cousin which weighs 43,000 lbs and is 20x bigger at 330 cubic meters. They hope to launch 2 B330’s on Atlas 5 rockets, dock them together and then use Dragon and Starliner capsules to form a new space station by 2020. Inflatables look like the future for deep-space habitats and moon and Mars living quarters.

Our main topic for the night was Keith helping us discuss his article published in the Spring 2016 Ad Astra magazine (you need to be an NSS member to read the article) titled “Space Colonization: What are we waiting for?”. His point is that the long duration of the project will require new type of support, much longer and more stable than has been available to past space projects. It will need to be International and probably will require a new form of government organization. He also notes that space projects have many tangible benefits for the people of Earth. Jobs and the accumulation of new technologies will make life better for those that remain behind and build and support the effort. Perhaps the greatest benefit will be the sense of accomplishing something that improves the state of all humanity. We discussed the topic for 45 minutes and followed up with Neil DeGrasse Tyson interviewing Bas Lansdorp the CEO of the Mars1 one-way trip project. We all agreed that Mars1 might be a little naive about the efforts required to put people on Mars and that Buzz Aldrin’s plan detailed in his book “Mission to Mars: My Vision for Space Exploration” has more engineering rational behind it.

Recent topics that we discussed were: