This was our 47th meeting. Phil, Silvio, Dave, Dean and I were in attendance.
Silvio and I related our presence at the Cernan Space Center relaunch on May 24, 2016. There were quite a few dignitaries present, including a couple of mayors and the Triton College President. The last SkyWatch had good news, Dan Troiani has been rehired after his retirement and now will be compensated for his production of the SkyWatch program.
Silvio showed some pictures from his trip to the Palomar Observatory on his recent visit to California. He was very disappointed with the lack information given to visitors. Even the gift shop was closed.

I told the group about my recent trip to the Adler Planetarium. Carol and I survived the 3 mile stroll from the Olgilvie train station to the planetarium. We had a great day and the scenic vistas of the lake and the sailboats were fantastic. We saw the new show, “Planet Nine”, which was great. It’s nice to be able to hear directly from one of the 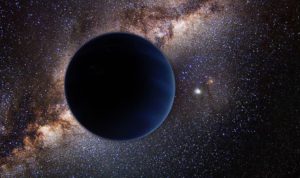 researchers, Mike Brown, and see the up-to-date data presented in such a visually rich manner. The object, Planet Nine, is implied from the orbital characteristics of numerous Kuiper Belt objects and is estimated to be 15 times more distant than Pluto (600 AU) and to have a mass 10 times that of Earth.

I also gave a quick synopsis of the book “Dark Matter and the Dinosaurs” by Lisa Randall. She has an interesting theory that there is a second form of dark matter (DM) that is self-interacting. This enables the DM to form atoms and give off dark light and most importantly condense into a very narrow (~20 light year wide) disk within the Milky Way (MW). The Sun as it revolves around the MW, bobs up and down like one of the horses on a merry-go-round. Her theory is as the Sun passes through this plane of DM, the comets in the Oort Cloud are disturbed and sent crashing into the inner solar system causing mass extinctions. The dinosaur extinction 66 million years ago would have been one of these events. By analyzing crater ages and extinction events she proposes that the Sun bobs up and down in a 32 million year cycle and our last pass though was 2 million years ago.

We also did a preliminary report on the upcoming entry of the Juno probe into orbit around Jupiter on the evening of July 4th. The 35 minute burn is expected to occur from 10:18 to 10:53 PM Chicago time. At the time Juno will have set the record for the fastest man-made object, 160,000 mph, as it gets pulled into Jupiter’s enormous gravitational field. NASA has a great video describing the mission. Juno also has to be careful of Jupiter’s enormous radiation belts also. Over its 20 month, 37 orbit mission, it is estimated that Juno will receive 20 million rads of exposure as it skims only 3100 miles above the clouds at the low point of its elliptical orbit. For comparison the typical person on the Earth receives about .3 rad/year. To protect its electronics Juno has a 500 lb titanium vault will .3 inch thick walls. Juno will give us the first pictures of the poles of Jupiter and will probe beneath the clouds with multi-spectral scans. By studying the gravitational field it will try to determine if Jupiter has a rocky core.

Our last topic before we started current events was a short TED talk titled “How Humans Could Evolve to Survive in Space”. Interesting talk but a little scary when they start talking about doing gene-engineering on humans.

For current events we covered the following topics:

Due to time we decided to defer our main topic, “The Telescope” which talks about the history of telescopes and the JWST in particular, to a later meeting.