This was our 50th meeting! Boy, time sure flies when you’re having a good time! Keith, Silvio, Harry, Dave, Phil, Dean and I were in attendance. Since it had been 15 long weeks since our last meeting, we spent quite a bit of time catching up on what people had been up to.

Dean made a great presentation on the history of US Mars exploration at the Villa Park Library on January 30th. As a complimentary resource, I’ve included a graphic that does a great job in showing all the space probes sent to Mars from all

countries and whether they were a success or not. The graphic doesn’t have the update that the recent 2016 European ExoMars orbiter (Russia provided the launch rocket) was a success but the demonstration Scaparelli lander, included on the mission, crashed into the surface of Mars.

Phil told us that he has planned a visit to the Kennedy Space Center. It sounds like it will be a thorough exploration of the site with a “Lunch with an Astronaut” event and a launching of a Delta IV rocket with a Defense Department satellite on March 8th. We all wished him good weather. 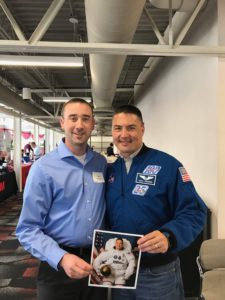 My son Curt this week met up with astronaut Kjell Lindgren at a conference where Kjell made the presentation “Safety in Space”. Kjell was kind enough to pose for a picture and sign a photograph as a souvenir. Kjell was on the ISS during the later half of 2015 while Scott Kelly was performing his “One Year in Space” mission.

We announced that Dean has rescheduled his talk about the pre-Space Age observation of Mars at the Villa Park Library to March 27th.

Dave told us he will be driving his school bus to pick up the astronomy class of the Universary of Chicago at Yerkes Observatory near Geneva, WI this coming Sunday. Unfortunately we don’t think the observatory will be open to the general public on that day, so his offer to take us up there might not result in an opportunity to tour the facility.

Other topics we discussed were,

For our main topic we watched “The Dark Side of the Sun” which was on the Science Channel on 2/12/2017. The program talks of Solar Probe Plus  (launch in August 2018 on Delta IV heavy) which will achieve a speed of 450,000 mph (125 mps) as it orbits as close as 4 million miles of the sun (9 times closer than Mercury’s average distance). It will execute 7 flybys of Venus. The probe survives with a 4.5 inch thick carbon composite shield which withstands 2500 degree temperatures and DKIST (Daniel K. Inouye Solar Telescope) the world’s largest solar telescope being built in a National Park in Hawaii.